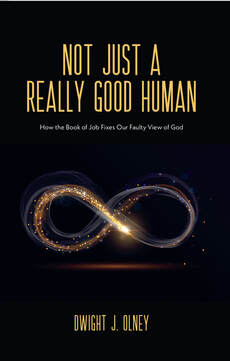 One cannot help but be both absorbed and bothered by the Book of Job. The early chapters of the drama draw us in. Job’s initial faith response is captivating, as are the perplexing implications of a sovereign God who would choose to take such a good man down such a difficult path.

For sincere travellers who desire to make their way through the story, challenges emerge. Plowing through the dialogue between Job and his friends is laborious. At times, the language is dark and depressing, and the friends become boring by repeating themselves.

​Even when God makes his presence known and speaks directly with Job, he is far less sympathetic to the suffering saint than he would be if a human had written the script singlehandedly. And although the last chapter of the book provides the happy ending we all crave, a lot of questions remain unanswered. We may not feel fully satisfied.

Now, to be fair to God, this dissatisfaction probably has more to do with our faulty human thinking than with God himself. Suffice to say that the biggest theological problem for humans will always be the inclination to mould God into a human image rather than the other way around.

Regardless, from a human standpoint, it’s not unrealistic or evil to say that the Book of Job provides at least as many questions as answers.

Perhaps that’s why few travellers venture into this territory for any prolonged period. The Book of Job is a challenging piece of ancient eastern literature written thousands of years ago, containing both prose and poetry. Much of the imagery is of another era and not easily grasped by the modern western mind.

Even though it doesn't outline easily like one of the Apostle Paul’s New Testament letters, and even though Christians don’t readily turn to its pages for personal devotional time, those who wander into its domain are captivated by this book and its themes. Who at one time or another hasn't asked God―"Why did this happen to me?" For centuries, people have cried out to God, pleading for an answer to this question while agonizing in pain, weeping in grief, or languishing over loss.

Humanity suffers an excess of adversity and heartache—emergency major surgery, a protracted terminal illness, the premature death of a child, divorce, suicide, a wayward teen, a loved one critically injured in a car accident, a child born with brain damage, a major setback in business, a sudden loss of possessions by fire, earthquake, or flood... and because we are rational beings, we hunger for explanations.

If we could see a direct relationship between suffering and sin in our lives—definite connections between our tragedies and our transgressions—the balance of the equation would put our minds at ease. Or so we think. But all too often problems intrude without explanation. And when we cannot link misfortune directly to known acts of misbehavior, we conclude that our afflictions are undeserved.

"What did I do to deserve this?" This common wail of despair reveals a sense of injustice, a feeling that the problems we experience at times exceed what is rightfully owed us.

I’m not sure where the notion comes from, but we are inclined to think that life should go well for us, generally. Perhaps we were told by someone we trusted or maybe it’s just a natural human tendency, but we're reluctant to give up on the idea that we deserve a certain level of comfort in this life.

Regardless of the source of this presumptuous paradigm, it could be argued that the Book of Job provides the most intense example of undeserved suffering in all literature.

Right out of the gate, we hear that Job is a fabulous guy. And yet, essentially in no time at all, this wealthy and godly man loses everything he holds dear. Adding insult to injury, his friends accuse rather than console, while God remains conspicuously quiet. And even when God speaks to Job out of the whirlwind, Job doesn't get the explanation he repeatedly claims he deserves.

While many people make commendable statements about Job and the book that recounts his story, relatively few know him very well. Typically, people cite with admiration Job’s idealized endurance and most quoted lines: “I know that my redeemer lives” (Job 19:25) or, “Can the dead live again?" (Job 14:14)

Yet this image of Job as a model of persistent endurance is distorted. He must not be seen merely as an Energizer Bunny who keeps on going and going, nor simply a visionary of eternal life that ultimately remedies the unjust suffering of human existence.

No. For much of the book, Job is a mess. And his messiness is what makes the book so valuable.

The story maintains its meaning for the average suffering soul because it presents a total package of a person's struggle. His questions and impatience are afforded even more time than his affirmations. For to know Job’s endurance without his protest, and his affirmations without his agonizing struggle for meaning, is to not know Job at all. Job’s questioning of the value of faith and his search for the reality of God amidst a nightmare are the points at which we can most readily identify with him.

The Book of Job is not a simple book. It’s not one that, in the end, applauds pious platitudes. We don’t walk away with any useful religious clichés. Even though we are given more insight into the drama than Job received, we are still left with many questions when the story is done. Was this test necessary? Are such tests a regular occurrence in the courtroom of Heaven? Is all human suffering initiated by divine providence or does some bad stuff just happen because we live in a fallen world? Are natural disasters part of God’s plan or do weather systems just do their own thing? Why is there such disparity in the level of suffering different people are called to endure? Why does some anguish just never end? Can there be any redeeming value in a tragedy like the Holocaust? Can we really view God as good when he allows awful things to happen to good people? What do we do when God seems silent in response to our cries for help? And, as noted above, what do we really deserve in this life?

Again, the Book of Job evokes as many intellectual problems as theological answers. But that’s okay, because it demonstrates that God can handle human questions, even emotionally charged ones.

In fact, confused and angry cries to God are a critical part of processing human suffering. Remember, God is the one who made us rational beings, so it’s not a crime to try to make sense of things when life begins to unravel. And it is part of the human package to feel strong emotions when things don’t seem logical or fair.

Such scenarios beg the big question: how do we keep our faith in God when our lives go down the toilet?

To say that Job is puzzled by his circumstances is an understatement. At times, he is almost out of his mind in pain and confusion.

Much of human suffering is bewildering and baffling. And because this book deals with the universal mystery of seemingly unmerited misery, ultimately it is a book about faith. Faith in God.

But as will become evident, Job will need to enlarge his spiritual vision. He will be called upon to muster up a new level of belief and trust in a very big God who isn't confined to the realm of proper human behaviour.  What will be demanded is not faith in a God who is just a really good human, but rather faith in a God who is the great and glorious Creator, Sustainer, and Judge of the Universe.

Ultimately, the Book of Job will only make sense to those who are prepared to enlarge their view of God. Hopefully, the musings to follow will help accomplish that.